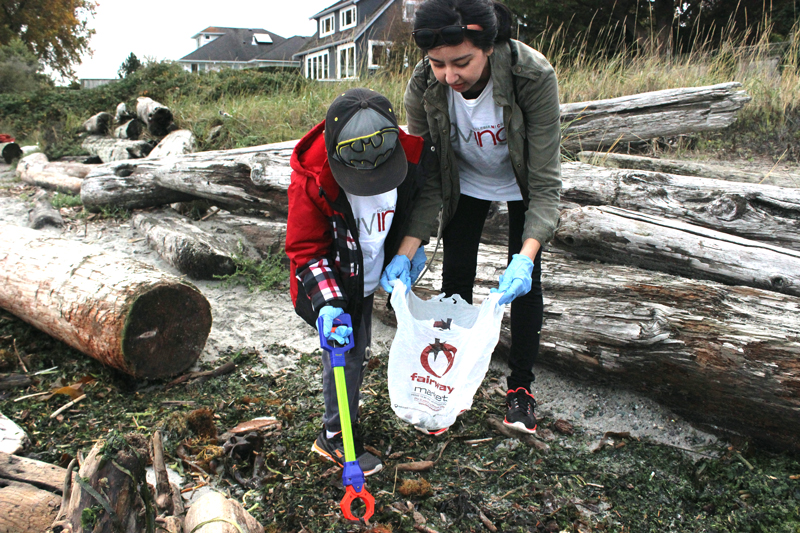 Partnering with the Great Canadian Shoreline Clean Up, the #INCGiving volunteers in Victoria, British Columbia participated in a Shoreline Clean Up at Willows Beach.  The hope of community events like this, is to educate residents and our neighbors to learn to take care of the environment; to help clean up marine debris and to encourage recycling.

Beaches everywhere are riddled with plastic & other debris – a shoreline epidemic that runs up and down the coast of Vancouver Island, as well as other beaches around the world.  Plastic in the ocean leach toxins, which potentially enter our food chain, or is eaten by marine animals.

Human-created waste, whether deliberate or accidental – like dumping, container spills, litter washed into storm drains and waterways, and wind-blown landfill waste – contribute to this problem.

A recent article by onegreenplanet.org showed that the toxins that leach out from plastic are: BPA (Bisphenol-A) a known endocrine disruptor; phthalates – another endocrine disruptor; and styrene – a chemical found in styrofoam which may create respiratory problems when heated.

Styrofoam was part of the garbage collected and cleared during the shoreline clean up, along with small and big pieces of plastic, and cigarette butts By cleaning up the beaches of debris, we hope to reduce the amount of garbage and plastic that will ultimately end up in the ocean, thus keeping Earth healthy for future generations.

“I think that it brings us together and the benefit is it keeps the planet healthy,” stated by Jim H, a passerby.

All the volunteers were happy and excited to participate in this clean up, despite it being a weekend.

“It always makes me feel good when I’ve done something productive like this on a weekend instead of just sitting around at home all day. Doing this also helps me to appreciate the city that I live in.” stated by Jayper Sanchez – an INCGiving volunteer.

Appreciation of the beautiful neighborhood they lived in, motivates the INCGiving volunteers to ensure that Willows Beach and the environment will be taken cared of for future residents of their community.