Yellow and white rectangles were laid neatly on the ground, one row above the other. As odd as it seemed, this clearly wasn’t random rubbish strewn across the ground. Something was happening here. There was a plan. A closer look revealed that these were actually rubbish bags that had been carefully laid out. Considering this all happened on Clean Up Australia Day, it made perfect sense.

Every year on the first Sunday of March, Clean Up Australia Day is held throughout the entire country. It’s an effort that was started in 1989 after Ian Kiernan noticed heavy pollution and trash in the various waterways that he passed through during a yacht race. He was moved to action and as soon as he returned, aimed to clean up the waterways, starting at Sydney Harbor in his home country. Fast-forward almost 30 years later, with over 7,253 sites and over 587,000 volunteers nation-wide, the Clean Up Australia Day effort continues to inspire others to take action.

One such group are the volunteers of the INC Giving Project from the various Iglesia Ni Cristo (Church Of Christ) local congregations across Australia. They were the ones responsible for the yellow and white rubbish bags on the ground, which they later filled to capacity with as much rubbish they could find. The broad reach of the Church Of Christ, along with the versatility of the INC Giving Project, made these volunteers well suited for an effort like Clean Up Australia Day. This was in full display as men and women, young and old, came together to clean up Australia’s parks, waterways and public spaces.

“…gain a deeper understanding of what volunteering is truly rooted in.”

These sorts of efforts benefit communities in so many ways. The obvious benefit of course is the environmental impact. Beyond this though is the improvement of societal health, which we see any time multiple communities are united by one common goal. It gives many the opportunities to meet and interact with people from outside of their own neighborhoods and social circles, and ideally, gain a deeper understanding of what volunteering is truly rooted in.

This is the ultimate goal of the INC Giving Volunteers; to pass along the message of kindness for the community and care for the environment, and above all the message of God’s teachings- not only through words but through the actual work and labor that is put in to volunteering.

“…feel free to grab a bag and jump right in…”

So the next time you see yellow and white rubbish bags that are laid out neatly on the ground, don’t worry. No need to call a clean up crew, because chances are the crew is already there; and since you are already there staring at a neat row of bags, feel free to grab a bag and jump right in and join the INC Giving Volunteers on their latest effort to do good.

“…join the INC Giving Volunteers on their latest effort to do good.” 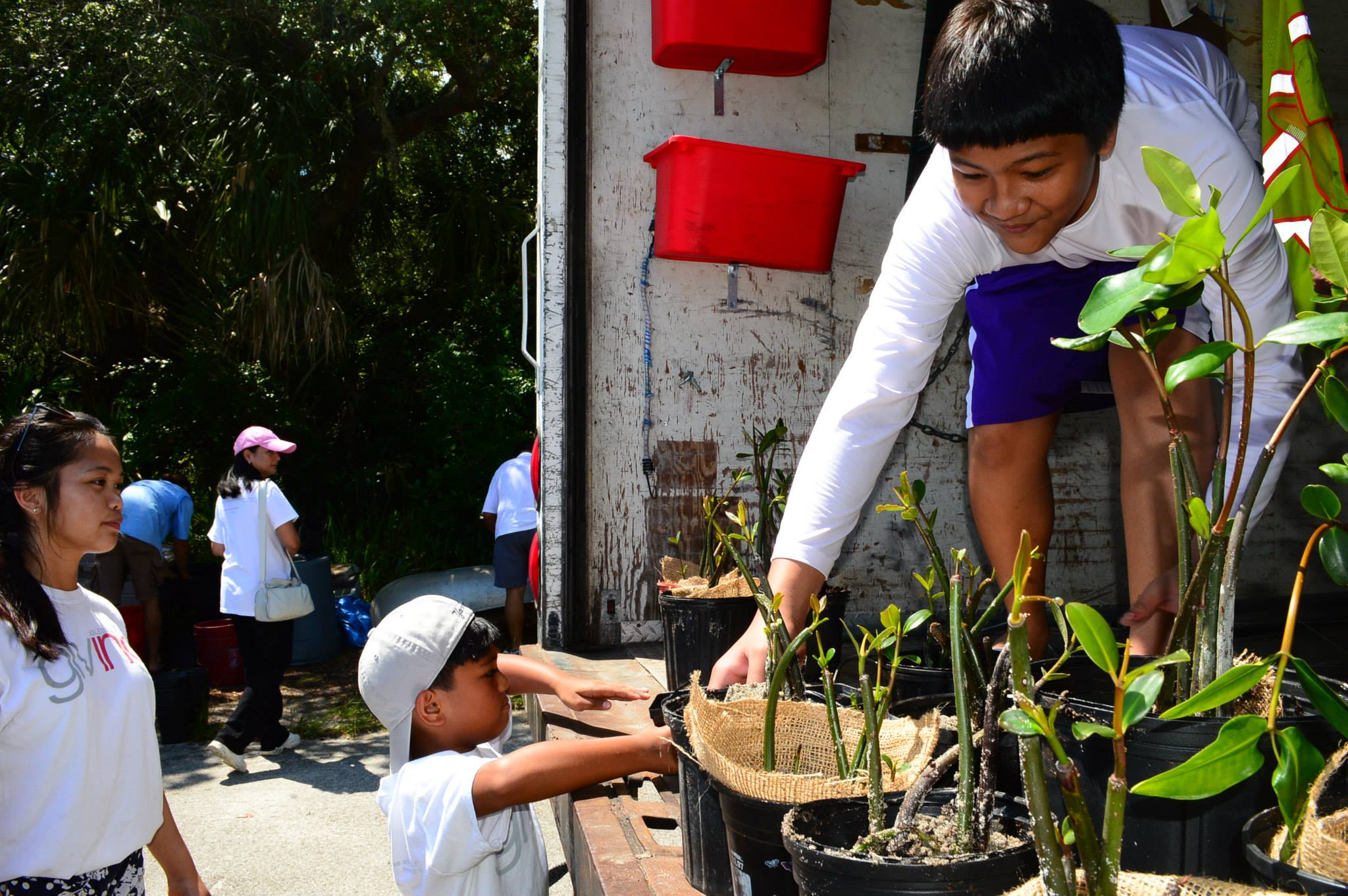 The brethren from the Local Congregation of Cocoa Beach, Florida joined together in potting mangrove trees with the intention of helping to better the condition of the Indian River Lagoon, a prominent body of water in the region.

Mangrove trees are plants that sit on the shorelines of saltwater areas; they are an essential part of Florida’s environmental health. The roots provide home for sea creatures, the branches are rest areas for many migrating birds, and falling leaves bring nutrients to the water.

The brethren joined with organizations such as the Marine Resources Group to give opportunities for these plants to continue spreading, and provide homes for organisms throughout the Indian River Lagoon, which is sadly in dire straights because of human development.

With God’s help, the brethren were able to pot over 100 seedlings, which once matured, will be planted on the riverbank. They are excited to return for more opportunities to help the environment.

Special thanks to the Marine Resources Group for letting the Church of Christ INCGiving Volunteers join their labor of love for the Lagoon.
Contributed By: Sister Chloe Ravina – Local Congregation of Cocoa Beach, Florida, Ecclesiastical District of Southeastern Seaboard