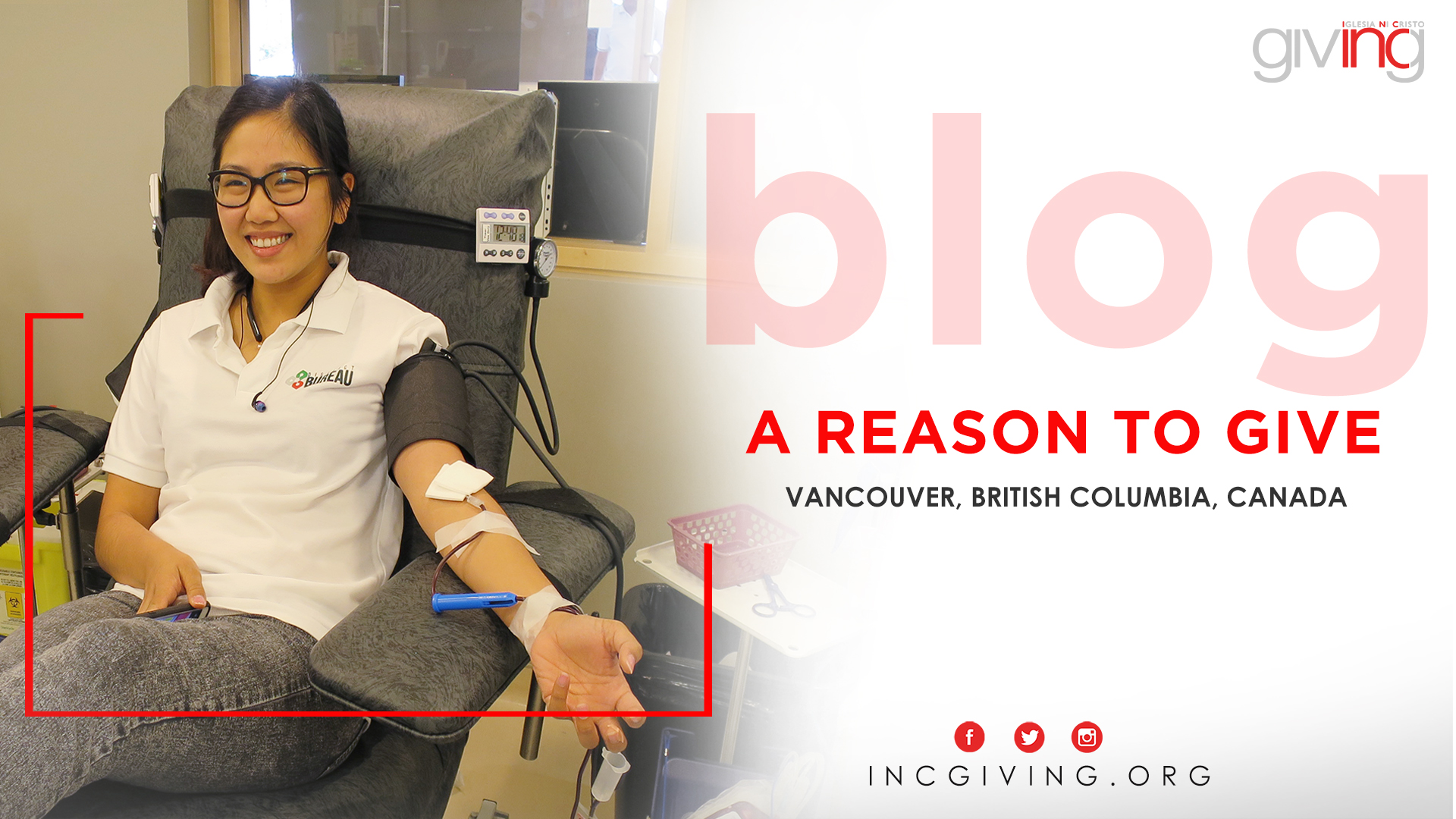 Being a nurse, one of my duties is to administer blood/blood products, and monitor patients requiring a blood transfusion. Therefore, it is normal in my line of work to see units of blood at the hospital being brought to patients’ rooms and to operating rooms. They are a dire necessity. They help save lives.

When I heard that there would be a blood donation drive sponsored by the Iglesia Ni Cristo again this year, in partnership with the Felix Y. Manalo Foundation, I was eager to participate. I donated blood for the first time last year, representing the same organization, and despite the challenge I had with my small veins, I decided to give it another try.

Sitting there, I realized that I was not well hydrated, and it took quite a while for me to fill up the bag. The next time I donate, I will make sure to drink plenty of water the night before and on the day of the event, so that I can stay well-hydrated — this will make the whole process easier and quicker.

When I finally finished, the nurses offered me juice and cookies. Afterwards, they also gave me a sticker that says “Be nice to me! I donated blood today” and a cute Band-Aid that says “I gave life”.

In speaking with my fellow volunteers at the Canadian Blood Services Clinic in Surrey, it was interesting to find that some of them have given blood numerous times in the past. One gentleman I talked to has donated blood over 25 times! Another lady said it was her 12th time!

Can you imagine the number of people those volunteers and donors have helped over the years?

I felt happy that I was able to do my small part in helping my community. As I was sitting there, I wondered about the individuals whom my small contribution will be able to help.

What are their stories? Why did they need to have blood transfusions?

Even though we don’t get to see the recipients of our donation, it is still a good feeling knowing that we can make an impact on another person’s life.

During my shift in the hospital that evening, the strangest thing happened: I had a patient who needed to have a blood transfusion, and while I was preparing to attend to him, I noticed that he happened to have the exact same blood type as me!

As I prepared the unit of blood, I smiled, and thought to myself — here is an individual in front of me who would benefit from the blood donated from donors like me.

This realization made a great impact on me. As I left the room, I proudly wore my sticker that says, “I donated blood today!”  I felt even more inspired to continue to donate blood whenever I can. I hope anyone reading this would be inspired to do the same.

Lou Aquino is an INC Giving volunteer from  Vancouver, British Columbia, Canada. She is an active participant in INC Giving Projects and the Felix Y. Manalo Foundation.

Lou is a Registered Nurse in a Telemetry Unit, and looks after patients with cardiac conditions. Lou takes pride in helping others and believes that as a member of the Iglesia Ni Cristo (Church Of Christ) it is our duty to be kind and help those who are in need. 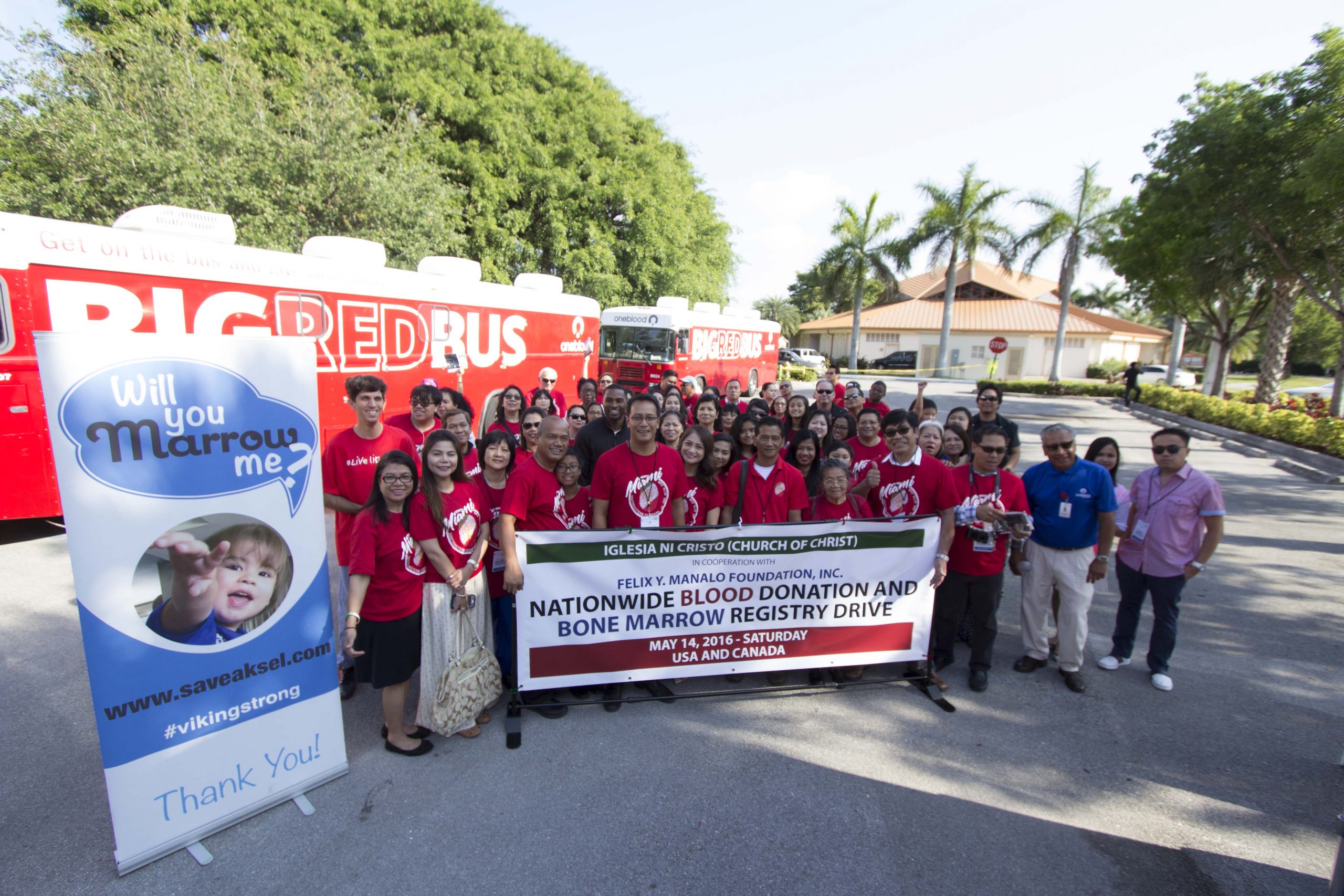 Stephanie Dinogan from Omaha, Nebraska arrived early at the Omaha house of worship. She had organized blood drives before but this time it was different. This time she walked in not just as the coordinator but also as one of the hopeful donors.

After meeting with the Red Cross representative, Fiona Sullivan and the Drive Director, Rob Knobbe at 7:00 AM Central Time, Stephanie and the other volunteers took their spot at the registration table and by 8:30 AM, the scheduled donors began to stream in, punctual and very eager to be part of a special event.

“It’s my first time donating! When I look back on this moment I’ll remember uniting with my brothers and sisters in faith in this remarkable effort to save the lives of others.” said Sister Stephanie Dinogan

Donors came in all ages. Elderly sisters bravely donated once again and new high school graduates lined up to do their part. There were young members as well, too young to donate but not too young to help out. They encouraged everyone to donate because they were the product of 16 blood transfusions as a little baby.

Anytime we leave with more blood than what we came with, it’s a success…I would love to come back and do this again. And you know the saying that one donation can save up to 3 people? So, even if you think you could have gotten more, even 30 people could save 60 people. – Rob Knobbe, Blood Drive Director, Omaha, Nebraska.

“Everyone said the same thing, we were literally donating at the same time as hundreds maybe even thousands of other people,” said Stephanie Dinogan.

In Manitoba, Canada, donors also gathered to donate blood. Those from outside the city of Winnipeg also drove in to support this activity. They joined the thousands of members of the Church of Christ from across the North American continent that, at that moment, were doing the same thing.

“From the moment we walked into the blood bank, the excitement and anticipation from first-time donors up to regular donors, were truly felt. Up to 50 donors can help 10 patients in cancer treatment, and by the Church contributing to this cause, they are helping in supplying that need.” – Zandrhea Pelimiano, Calgary, Alberta

Meanwhile, in Mississauga, Ontario, Canada, James Sabayo was prepared to donate blood for the first time. His dad, Roland Sabayo, a leukemia survivor inspired him and a few others in the congregation to also do their part.

Listening to the experiences of those whose lives were affected through the kindness of donors’ fueled members with inspiration as they arrived to donate blood.

In the United States, blood banks saw the same overwhelming response from volunteers eager to do their part.

“It’s really good [for organizations to host blood drives like this one]. We can’t do our job if you guys don’t do your job and have the blood drives. And so, if you don’t have blood drives, we can’t collect our product efficiently and at such a quantity as we’ve gotten today; [which] is amazing. – Rebecca Ruitenberg, Community Blood Services – Donor Tech, Elizabeth, New Jersey

Many walked in with various reasons as to why they wanted to help.

“My mom, when she was alive, she had a few blood transfusions. If you can donate [blood] and it can go to someone who really needs it, then unknowingly, you’ve saved someone’s life. It’s great, it’s like I’m literally saving lives.” Blake Zaide, Chicago, Illinois

“This is a very noble activity. As a blood transfusion recipient myself, I know very well the importance of donating blood, that’s why I did not hesitate. – Dr. Charlene Vargas, Local Coordinator, Orlando, Florida.

“I donate regularly because growing up I knew my grandma needed blood transfusions. I know it’s needed by a lot of people and it’s not hurting me in any way. So if it doesn’t hurt me anyway and it benefits people who need it, Why not?”– Christine Valencia, Markham, District of Eastern Canada, 4th time blood donor.

“I remember that there were times Myla was needing blood transfusions almost every week and platelets transfusions every 2 to 3 days! Seeing brethren nationwide, in the US and Canada, makes us so happy – knowing many just like Myla before, will benefit from this drive!” – Leyna Cunanan, Alameda, California

After her daughter Myla was diagnosed with Myeloid Sarcoma, a solid tumor composed of immature white blood cells, Leyna has taken countless trips in and out of the hospital and knows all too well what events like this can do for her daughter and for the community. But what was most inspiring to her was when she saw this flyer on the Asian American Donor Program’s Facebook page.

“We are so excited. I just saw a flyer of a patient with our Iglesia Ni Cristo address on it.”

The Asian-American Donor Program is dedicated to increasing the availability of potential stem cells donors for patients with life-threatening diseases curable by a stem cell transplant. Because of the shortage of registered donors in different ethnic groups, many of those diagnosed run the risk of never finding a match — making events like the ones sponsored by the Church Of Christ, through the Felix Y. Manalo Foundation, not only timely but life-saving.

“Myla and our family hope that with the bone marrow registration drive many patients will find their match.” – Leyna Cunanan

So, at many of the Blood Drive sites were also tables for individuals to register to be a Bone Marrow Donor.   Be the Match, the organization that coordinates Bone Marrow Registration in the US, however, was not able to send recruiters to all the different sites of the Iglesia Ni Cristo, so individuals like Vivian Abernathy trained some of the young volunteers from the Church to go out to different locations themselves and help register Bone Marrow Donors.

“Those types of volunteers for us are like gold. They are so important because today, we were able to reach out to different spots that INC is doing blood donations that we weren’t able to be at. We are so blessed to have you (INC) to do that.” –Vivan Abernathy, Be The Match Coordinator, who worked with INC brethren from the local congregations of Los Angeles, Eagle Rock, and Glendale at Children’s Hospital LA for the Nationwide Blood Donation & Bone Marrow Registry Drive

In total, thousands of members throughout the United States and Canada united together in blood donation and bone marrow registration drives hosted at 137 different sites.

“I think we all felt almost at peace that we are all in the same Church, staying united with the Church Administration…. and also having fun doing it!” – Cecille Assim, Burnaby, British Columbia

The event was especially important for the Cecille Assim, an oncology nurse and daughter of a cancer survivor. The event allowed her and husband in Burnaby, British Columbia, her sister Camille in Edmonton, Alberta and her parents and brother in Ottawa, Ontario to participate despite the distance between them.

“We were all texting and sharing pictures all day! My sis and I even wore the same shirt that day for the pamphlet drive and blood donation!

We all first off wanted to participate because we wanted to be united with the Church Administration. And secondly we knew this could help someone like my mom. We all can’t help someone directly affected by cancer. But this is one way to help them in their time of need. And not only cancer patients…but those going through surgery, motor vehicle accidents and more!” – Cecille Assim, Burnaby, British Columbia